We still have some box sets of How Europe Does BABES, BOMBS, and GUNS, so it looks like it will be a while more before we release our excess stock of Electra One by itself.
Internally, we have been having some discussions about pricing for this release. We threw it into the box set just to round out the set to 4 films, but we hadn't really thought of it as a stand-alone release. One reason is because we took it from our master 1" tape. 1" tapes can be ok quality, but it is not on par with our other releases.
For those of you who bought the box set, now that you have seen the film and the quality it is presented in from the 1" tape, what is the price you would buy the movie for?
Posted by MK at 12:03 AM 1 comment:

Email ThisBlogThis!Share to TwitterShare to FacebookShare to Pinterest
Labels: Electra One, How Europe Does BABES BOMBS and GUNS

Roger Browne plays one interesting super-...uh...hero? in The Fantastic Argoman. He seems equally selfish and altruistic. You could expect him to save the world from complete destruction, and at the same time you could see him walking right into a bank and grabbing a handful of cash. It is a fun, interesting, and enjoyable film. It truly is something you have to experience for yourself to appreciate. Any movie this good deserves to be released on DVD and available to the masses. We wanted to talk about The Fantastic Argoman for a little bit today. Talk about where the project is, where it is heading, and what could be done to speed it along.
Why the delay?
The largest obstacle we have right now to releasing this film is about 4 minutes long. Check out the clip to the right. We are missing the entire 4 minute introduction of the film before the credit roll! This shows what type of a "hero" Argoman is and it introduces you to some of his powers. It is a good hook for the film and pretty important. WHY the labs in Europe don't have this scene is beyond our understanding. Either we are getting toyed with or this is a devastating loss of footage you could have for a film like this. This scene is directly referred to right after the credits, so it seems bizarre to claim that it was not meant to be included in the film. Frustrating? Yes. Giving up? No! Our "worse-case" scenario is to use the cruddy copy of the introduction we have with a disclaimer. We could also have fun with it and make it look like a vintage "newsreel" clip and put it in the main menu.
Not how we want all the work of dredging through European film labs to end, but we DO want to release this film at some point. Feel free to sound off in the comments as to what you would do in our position.
Where does the project sit now?

The project has been in "stasis" while we have hunted down the footage. We have done a little bit of work on the front cover. We did a copyshot (which means we took a picture of a poster with a DSLR) and we cleaned up all creases, rips, bends, etc in the image. It came out great, as you can see. We need to modify it a bit for the final cover, but it is a great beginning.
We bartered for some very high quality stills and posters with a great guy from France. We are in great shape to make menus, the rest of the cover, and the rest of the artwork to get this film off it's feet in no time. When we are moving full steam again on this project, it should be a matter of days or weeks... not months. Thank you all for your patience!
Can we help with anything?
If you can hunt down the footage for the introduction, that would be the largest contribution one could make to this project. Maybe you have some ideas of how to utilize the footage we already have to make the final product work seamlessly? Feel free to drop us a line for suggestions and comment on the blog... we want this film out there as much as you do!
Posted by MK at 4:55 PM No comments:

How Europe Does BABES, BOMBS, and GUNS

We recently finished our long-overdue update to the http://www.DoradoFilms.com website. We added the last finishing touches while waiting for some material for the box set "How Europe Does BABES, BOMBS, and GUNS".
This box set takes our excess inventory of Mission Bloody Mary, From the Orient with Fury (1st edition), and Special Mission Lady Chaplin and combines it into an excellently priced package. We decided, to add value to those who have purchased some or all of these films, to add the film Electra One to finish up our first ever box set.
What's been keeping us busy:
After hearing back from the replication lab, we now have all of the pieces falling into place for the final release. We just opened pre-orders and announced the release date on our site for November 15th, 2010. 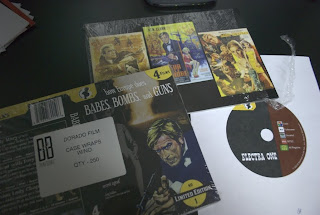 Looking forward to this release... see how does so we can make further plans for our releases.
Posted by Micah at 2:06 PM No comments: